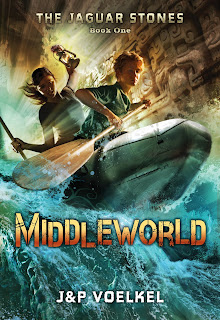 Fourteen-year-old Max Murphy is looking forward to a family vacation. But his parents, both archaeologists and Maya experts, announce a change in plan. They must leave immediately for a dig in the tiny Central American country of San Xavier. Max will go to summer camp. Max is furious. When he's mysteriously summoned to San Xavier, he thinks they've had a change of heart.
Upon his arrival, Max's wild adventure in the tropical rainforests of San Xavier begins. During his journey, he will unlock ancient secrets and meet strangers who are connected to him in ways he could never have imagined. For fate has delivered a challenge of epic proportions to this pampered teenager. Can Max rescue his parents from the Maya Underworld and save the world from the Lords of Death, who now control the power of the Jaguar Stones in their villainous hands? The scene is set for a roller-coaster ride of suspense and terror, as the good guys and the bad guys face off against a background of haunted temples, zombie armies, and even human sacrifice!
MiddleWord was written by a husband and wife team, the Voekel's. Jon Voelkel grew up in Peru, Costa Rica, and Colombia. He was not a natural-born adventurer and found life in the jungle difficult, to say the least. After college and business school in Barcelona, he worked in advertising agencies in Spain, Holland, and England, ultimately starting his own agency with four other partners - one of whom would be his future wife. In 2001, The Financial Times named him one of the top fifty creative minds in Britain.
Pamela Craik Voelkel graduated from Leeds University in English Language and Literature. After stints reviewing books, writing catalogs, and penning speech bubbles for photo-romances, she become an advertising copywriter. As Creative Director of Craik Jones Watson Mitchell Voelkel, she helped the agency win hundreds of creative awards.
The Voelkels' collaboration continues in Vermont, where they live with their three children.
The questions below were answered for Boys Read by Jon Voelkel - the male half of the J&P Voelkel writing team!
1. Why will Middleworld appeal to boys?
It’s the kind of book I loved when I was a kid. Lots of action and cliffhangers and nailbiting scenarios to keep you turning the pages – and you don’t have to wade through pages of description to get to the next big surprise! It’s a funny, fast paced roller-coaster ride of adventure as 14 year-old Max Murphy - a pizza loving, video gamer from Boston - faces off against the ancient Maya lords of death. There are secret passageways, haunted temples, raging underground rivers, ancient Maya kings, ruthless smugglers, zombie armies and, most important of all, a beautiful, jungle-savvy Maya girl.
2. What was the hardest part of writing your novel?
Getting started. I was supposed to be writing a marketing book. Our advertising agency in London had produced some groundbreaking campaigns and I’d been asked to write a book about our approach. But when I sat down to write it, I realized that my heart wasn’t in it. It was quite a difficult moment to tell Pamela that I thought we should write a children’s novel instead. And the next hardest thing was giving a draft to the owners of our local Norwich Bookstore and waiting on tenterhooks for their verdict.
3. Who is your favorite character and why?
My favorite characters were the Maya lords of death. It’s not often that you get to write characters that are pure evil and insanely fun as the same time. Their mix of outrageous humor, practical jokes and sheer villainy is not something we made up - it’s straight out of Maya mythology. Our favorite scene is in the Black Pyramid where Ah Pukuh, the god of Violent and Unnatural Death, throws a party and Max has a string of misadventures. It was so much fun to write - I was giggling the whole way through it.
4. Who are your favorite middle-grade authors?
There are so many great middle-grade authors, but my son and I particularly enjoyed Philip Reeve’s Mortal Engines series and the Monster Blood Tattoo Series by D.M. Cornish.
Posted by Boys Read at 8:12 AM