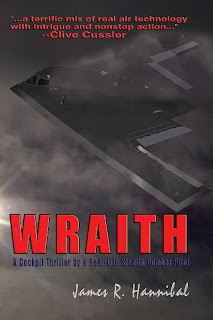 WRAITH is a covert ops thriller that had to be “sanitized” by the Air Force’s Stealth Program Security Office before publication. Clive Cussler described it as, “non-stop action,” and Publishers Weekly said it showed that “high tech weapons are only tools, and it’s the people doing the fighting who win the day.” Because of the war theme and some violence, it is appropriate for ages 13 and up.
WRAITH was written by James Hannibal, an Air Force Predator pilot and former Stealth Bomber. Outside of flying, he's passionate about writing and his two sons. His objective is to create books that he would enjoy as a man, but can also share with his boys. He works hard to write stories full of action and adventure, but devoid of foul language or sexual themes.
To see a very cool trailer, click here. To visit Hannibal's very cool website, click here.
Posted by Boys Read at 7:04 AM

And you've got to read Pirates: The Midnight Passage, also by James R. Hannibal!

I looked for this on Follett and it's not there. I'll keep looking-- I'm sure my boys would love it!