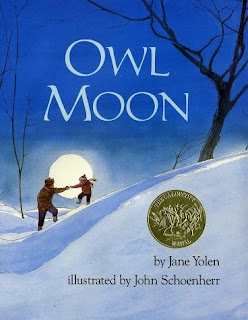 I had a craving for Owl Moon tonight. This is a classic that I re-visit every winter. The moon has been full and shining bright over the Cascade Mountains near my home in Seattle. Below is an overview borrowed from Jane Yolen's website.
"This gentle tone poem about a father taking his daughter (yes–it’s a girl!) out owling one cold wintry night is arguably my best book. Certainly it’s my best known book. The 1988 Caldecott Medal winner for John Schoenherr’s beautiful, frosty, tender, exacting pictures, the book has been translated into nine languages, been an ALA Notable Book, a Reading Rainbow book, a Junior Literary Guild selection, and on dozens of state award lists. Though I envisioned the book in the little woods near our house, Schoenherr used his own farm in New Jersey as the setting. The father is my husband David, the child our daughter Heidi. It’s not an exact story of David taking Heidi out owling, but an amalgam of many such trips he did with all of our children. I purposefully didn’t mention the child’s gender, though the flap copy gives the secret away. Heidi is now an adult with her own daughters, Maddison Jane and Glendon Alexandria. Their grandfather–Pa–has already taken them out owling. The only paperback edition so far is the Scholastic Book Club edition, not sold in bookstores. Publishers like to keep books in hardcover as long as possible (read: as long as it’s selling well). It will be some time by that measure before “Owl Moon” goes into paperback. There are over a dozen editions in foreign languages, including French, German, Chinese, and Korean. I wrote an article for the New Advocate magazine called “On Silent Wings” in the Fall 1989 edition that tells the complete story of the making of the book and what happened on the day the Caldecott was announced. The book was one of Yankee Magazine’s 100 Classic New England Children’s Books. It was also on the 1989 Kentucky Bluegrass Master List and a 1991 North Dakota Flickertail Award nominee."
Click here to watch the video.
Posted by Boys Read at 8:34 PM