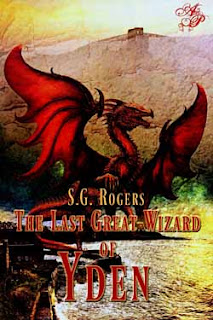 After his father is kidnapped, sixteen-year-old Jon stumbles across a closely guarded family secret--one that will challenge everything he has ever believed about his father and himself. A magical ring his father leaves behind unlocks a portal to another dimension, but in using it, Jon unwittingly unchains the forces of evil. A crisis develops when a malevolent wizard transports to Earth to kidnap one of Jon’s friends. With the help of some unlikely schoolmates, and a warrior princess from Yden, Jon embarks on a dangerous quest to free his friend and his father from the most vicious wizard the magical world has ever known. In the end, Jon will be forced to fight for his life as he attempts to rescue the last great wizard of Yden.
The Last Great Wizard of Yden is a full length fantasy novel. E-book available now through Astraea Press, Amazon, BN.com and other fine outlets ($2.99). Click here to learn more.
Posted by Boys Read at 9:44 AM

Thank you for featuring my book!

Sounds exciting. I will let one of my sons know. He likes this type of book. He just got a Kindle and I'm not sure if he's learned how to work it yet! LOL Good Luck

Both my son and nephew (16 and 15) loved "The Last Great Wizard of Yden"! I recommend it as a wholesome adventure that is sure to appeal to boys aged 12 and up!