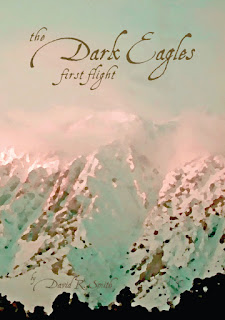 The Dark Eagles is an action adventure series that has become very popular with boys ages 10-14 and in particular to those who don't necessarily love to read.  So far there are two primary books in this series.

First Flight (Book 1) - Kief loves exploring the rugged mountains on his horse, Natch, with his best friend Tarc. But when he receives a mysterious map on his birthday, left behind for him by his dead grandfather, Kief is thrown into an adventure beyond even his imagination. Leaving home to pursue his childhood dream of attending the merchant academy on the coast, extraordinary events unfold propelling Kief, along with his friends and his map, toward the same perilous destiny.

Wells in Desolation (Book 2) - With his faithful friends and mystical stone, Kief sets out on his greatest adventure yet to seek passage across the dangerous seas in search of the dreaded Wells in Desolation. But there is more to fear than enemy soldiers and the pillaging rogues of the sea as others seek the power of the stone. Kief encounters new friends that help him along his journey and reveal secrets about his past and destiny. But a shocking truth threatens to doom the fate of The Dark Eagles.

These very cool books are by David Smith.  David says he set off to write an epic adventure of a boy and his horse and created a story of freedom, adventure, love, courage and sacrifice.

To learn more about this epic adventure and David Smith, click here.

I must say, I thought this was a pretty interesting read when it comes to this topic. Liked the material. web design company blog