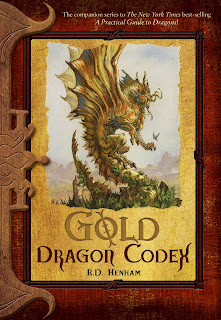 The blue dragon, Lazuli, lives to torment the villagers of Sandon's hometown, Hartfall. He demands more and more riches until the Baron, Sandon's father, has only one thing left to give: himself. Lazuli will arrive at midnight to take the Baron away. Sandon has only one hope left: the gold dragon that sits atop a ledge above the village, silently watching. In one legendary battle Lazuli magically petrified the gold dragon, once Hartfall's sworn protector. But Sandon is sure he can find a way to awaken the beast. In the dead of night, he sneaks out onto the gold dragon's ledge. And there he stumbles onto a secret that throws everything he thought he knew about his home and his family into question. Can Sandon unlock the secret of the gold dragon in time to save his village--and his dad?

This next installment of the series inspired by The New York Times best-seller A Practical Guide to Dragons shows just how much a young boy can do when he realizes that the strength of a gold dragon may lie inside himself. 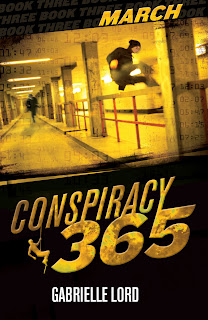 The Conspiracy 365 Series is action-packed. Warning, when you click here to access their website, don't have your headphones on. Everything about this site and series is fast and hard-hitting.
Posted by Boys Read at 1:04 PM 1 comment: 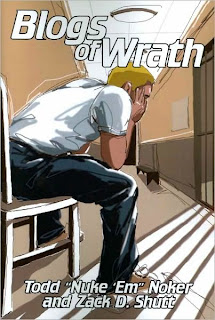 Carl DeReese only wants to survive junior high school in the Salt Lake City suburbs, but in an era when teachers are afraid of the students, some of his behavior is misdiagnosed as threatening. His longing to fit into a new school is complicated by a family tragedy, followed by a breakdown in the classroom that leads to criminal charges. The trials and adversities of growing up are catalogued on his online blog. Carl’s initial desire to fit in at a new school is challenged by his own insecurities. When he finally makes friends with a kid named Dex, his troubles seem to have ended. Typical teenage angst is multiplied when the expected birth of a sibling turns tragic, leaving Carl heartbroken and confused. A callous teacher pushes Carl into an emotional corner, and his outburst results in suspension from school and criminal charges.
Facing another regular day of junior high school is more than enough for anyone. Carl has to live through not only adolescence, but circumstances that could land him in a juvenile detention center without his family and friends. With so many authority figures assuming that he is dangerous and threatening, Carl has to decide for himself if he truly believes what everyone is telling him. The friends he makes and the support from his parents might be the only things that help him survive.
His emotions are honest, his online confessions are genuine and heartbreaking, and his fear of what the next day brings will make even older readers wonder how they survived junior high school.
This book is for ages 12-14. Many boys will identify with this cutting-edge theme. Congrats to Todd Noker and Zack Shutt for their vision and commitment to bring a rare and raw story to life for reluctant male readers. Click here for some cool Facebook info from Todd and Zack.
Posted by Boys Read at 4:14 PM No comments: 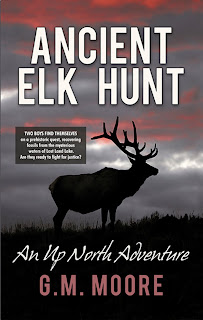 G.M. Moore's second book in the Up North Adventure Series is now available. Boys who liked book one, Muskie Attack, will love book two, Ancient Elk Hunt. Click here to access the series. G. M. Moore is a former newspaper writer, editor and columnist. The author grew up battling game fish on the lakes of northern Wisconsin. During the summer months, you can still find the Chicago-area author up north and out on the lake.
Posted by Boys Read at 7:58 AM No comments: 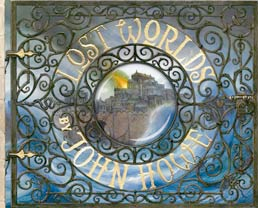 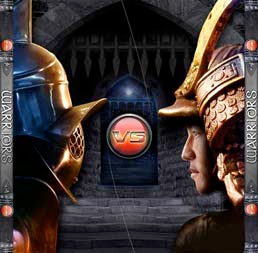 Kingfisher Publications has two new interesting books that should appeal to most boys. Lost Worlds is by John Howe, the concept artist for The Lord of the Rings film trilogy. From the world of Aratta and Mohenjo-Daro to Atlantis and Camelot, this visually stunning book explores lost worlds. Rich and stunning illustrations take you on a historical, archaeological, and mythological journey to far off lands abandoned in time. You'll find yourself flipping through these worlds over and over. Click here to watch a video trailer.
Versus: Warriors. Steve Stone is the illustrator of this very cool book. He has worked on hundreds of book covers, most notable Stephen King’s DARK TOWER series and Terry Brooks’ epic fantasy series SHANNARA. In this epic story, ten of the greatest warriors of history meet for the first time. From Viking vs. Aztec Warrior and Samurai v. Gladiator to Medieval Knight vs. Zulu, Versus explores who would triuimph and why, if these fiercest warriors were to engage in deadly battle against one another. Only one can be crowned history's ultimate warrior. Who will it be? Watch a video by clicking here.
Click here to access kingfisherpublications.com.
Posted by Boys Read at 4:41 PM No comments: