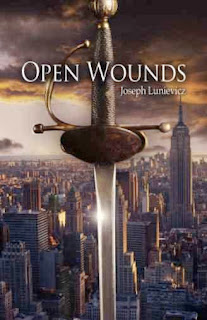 Cid Wymann, a scrappy kid fighting to survive a harsh upbringing in Queens, NY, is almost a prisoner in his own home. His only escape is sneaking to Times Square to see Errol Flynn movies full of swordplay and duels. He's determined to become a great fencer, but after his family disintegrates, Cid spends five years at an orphanage until his injured war-veteran cousin “Lefty” arrives from England to claim him.
Lefty teaches Cid about acting and stage combat, especially fencing, and introduces Cid to Nikolai Varvarinski, a brilliant drunken Russian fencing master who trains Cid. By 16, Cid learns to channel his aggression through the harsh discipline of the blade, eventually taking on enemies old and new as he perfects his skills.
Evocative of The Book Thief with a dash of Gangs of New York, Open Wounds is the page-turning story of a lost boy's quest to become a man.
This unique book is by Joe Lunievicz. Joe has excelled in many areas over the years – as competitive fencer, public speaker, yoga instructor, and improvisational actor – but in his heart he always knew he was a writer. For years he wrote early in the morning before work and then, after his son was born, late into the night.To learn more about Joe's book, click here.
Posted by Boys Read at 4:55 PM 2 comments:

The Civil War started 150 years ago today. To help boys develop an appreciation for this tragic American conflict, try our book Bothers of War. Below is some rave:
"My son was enthralled with Brothers of War! He read it cover to cover in an evening. The material presented was appropriate for a pre-teen, while the writing and plot were complex enough to hold his attention. He (and I) can't wait for more of Martin's writing."
— Catherine Sovocool, Piedmont, CA
Boys as young as nine years old participated in this American conflict. We have no accurate records of how many boys enlisted for the Northern or Southern armies. Over four hundred thousand were involved directly in the war. National laws now prevent boys from participating in American wars.
Andersonville was one of the largest Confederate military compounds. The site has an award-winning lesson plan for teaching about historical places. More than forty-five thousand Union soldiers were confined here. Over thirteen thousand men died within the prison walls from disease, malnutrition, and gross overcrowding conditions. The prison is now a National Historic Site; and the National Park System has honored it by designating its hallowed grounds to serve as a memorial to all American prisoners of war.
To learn more click here.
Posted by Boys Read at 6:41 PM No comments: