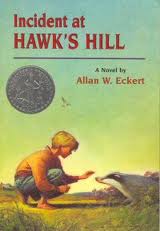 A Newbery Honor classic that is well worth a read with boys and girls.  The story is skillfully told by Allan Eckert.  As a young man, Allan Eckert hitch-hiked around the United States, living off the land and learning about wildlife. He began writing about nature and American history at the age of thirteen, eventually becoming an author of numerous distinguished books for children and adults. Seven of his books have been nominated for the Pulitzer Prize in literature. Incident at Hawk's Hill, won the Newbery Honor award in 1972.

In this story, six-year-old Ben gets lost in the wilderness near his farm.  The setting is the vast prairies outside of Winnipeg in 1870.  Ben has a gift for communicating with animals.  He uses this unique skill to establish a bond with a female badger who has recently been injured by an animal trap.  While caught in the trap, the badger's new litter dies.  Ben ends up helping heal the badger's injured foot and the badger adopts Ben as one of her own.  An endearing relationship develops between boy and badger and a page-turning survival story unfolds.

This is the kind of book that I love to discover for the first time. I found it at a public library sale.  Well-worn and yellowed, it was a real treat to read with my eleven-year-old daughter.  It's not easy to find copies of, so I feel lucky to have found one for less than $1.00. What a deal!