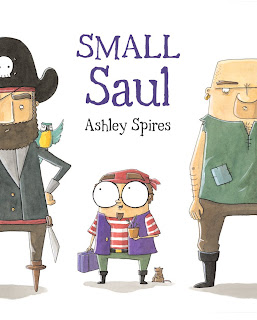 From the creator of Binky the Space Cat, comes this hilarious story about an unconventional little pirate. When Small Saul joins the crew of The Rusty Squid, it doesn’t take long for the other pirates to notice something is very different about this tiny fellow. He was born to sing sea shanties, bake pineapple upside-down cakes and redecorate, not to hold a sword and plunder. Being rough and tough just isn’t in his nature.
Small Saul learned at Pirate College that pirates only care about three things: their ship, being tough and lots and lots of treasure. Can Small Saul show these ruffians that despite his gentle spirit, he’s worth his weight in gold? With treasure chests of laughs, Small Saul’s high-seas adventure is a lighthearted celebration of individuality, perseverance and being true to one’s self.
Ashley Spires is the author and illustrator of Penguin and the Cupcake and the illustrator of numerous other picture books. Small Saul is Ashley’s most autobiographical character to date. As a child, Ashley much preferred picking flowers on the baseball field instead of watching the ball. She lives in Saskatoon, Saskatchewan.
To learn more about Small Saul, click here.
Posted by Boys Read at 12:15 PM No comments:

The Celebrities of Summer 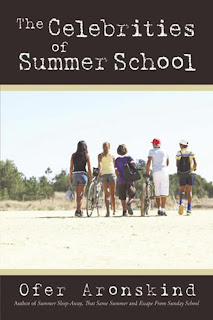 Thirteen year-old Will Ryerson has come to terms with the fact that he's not much of an athlete, will never be part of the school's "cool" crowd and is an average student at best. When he discovers that he's failed 8th grade science, he is devastated. He sits in the back of his summer course classroom and keeps to himself.
But when his beloved dog Riley goes missing, Will is surprised to find that a few of his classmates come to his aid. Equipped with cameras, cell phones and the latest gadgets, his new buddies help him find his dog, and at the same time open a whole new world to Will: the world of the internet. Using YouTube, Twitter, Facebook and all that the internet has to offer, the new friends soon find themselves at the center of attention as they embark on an adventure that will propel them way beyond the "cool" kids and into the ranks of celebrity status.
This unique book is by Ofer Aronskind. Ofer was born in Tel Aviv, Israel and came to the United States at the age of six. He grew up in Little Neck Queens NYC and now lives in Short Hills, New Jersey with his three sons.
To learn more about Ofer and his books, click here.
Posted by Boys Read at 7:58 AM No comments: