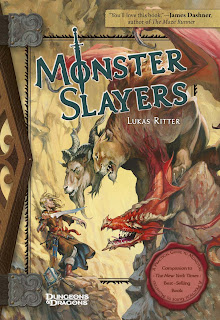 For as long as Evin can remember, he has dreamed of being a real hero. And when his entire village is kidnapped by evil monsters, he finally gets his wish. With the help of his friend Jorick, a young elf wizard named Betilivatis, and an ancient guidebook of magical beasts called A Practical Guide to Monsters, Evin treks through ancient ruins and faces all kinds of strange and terrible creatures on his quest to find his family.
But soon, Evin realizes that not everything is as it seems. Why is Betilivatis sneaking off to report their every move to someone only she can see? Why can’t Evin remember anything before the day of the kidnapping? Why does it seem as if someone—or something—is controlling the monsters and drawing the three friends deeper into a battle they might never win?
Click here for Monster Slayers
Posted by Boys Read at 1:22 PM No comments: 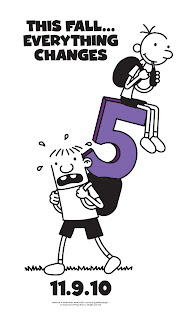 HOT OF THE PRESS: The fifth volume in Jeff Kinney’s bestselling Diary of a Wimpy Kid series will be on sale nationwide Tuesday, November 9, 2010. The cover will be purple, which follows the red, blue, green, and yellow of the first four installments.
“I feel like everything in the series has been leading up to the fifth book, which is about change and the different ways Greg and his best friend, Rowley, deal with it,” said Jeff Kinney. “To me, this book is the lynchpin in the series, and I’m excited to be writing it.”
Posted by Boys Read at 12:41 PM 1 comment:

A Place for Delta

A Place for Delta is a wonderful story written by Melissa Walker. When eleven-year-old Joseph Morse is invited to visit his aunt Kate in the northern most town in the US, Barrow, Alaska, he’s thrilled. But the real icing on the cake is the polar bear cub named Delta that he will be taking care of while there!
After arriving, Joseph adjusts to his new surroundings and falls into a pattern of care for Delta. He even makes a new friend, an Eskimo girl named Ada. Joseph and Ada soon find a murdered polar bear. They're determined to help solve the mystery and save Delta, who they know is also in danger. Joseph's adventure sets him off on an epic journey.
This is a great story for both boys and girls. Click here to learn more about Saving Delta.
Melissa Walker has been a Professor of English at the University of New Orleans and Mercer University and a Fellow in Women’s Studies at Emory University. She’s a vocal advocate for civil rights and for wilderness. Her previous books include Reading the Environment (W.W.Norton, 1994) and Living on Wilderness Time: 200 Days Alone in America’s Wild Places (Univ. of Va. Press, 2002). She lives with her husband Jerome in Atlanta and spends much of the summer in Alaska.
Posted by Boys Read at 6:53 AM No comments: