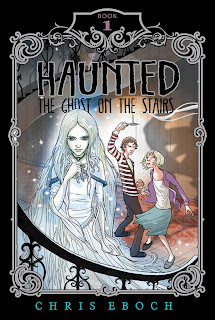 What do you do when a ghost needs your help?
Jon doesn’t believe in ghosts. Not even if his mother does, and married a man who researches ghost sightings for his own TV show. Not even when they travel with the show, and visit “haunted” places.

But his younger sister Tania claims she can see the ghosts. Deciding to believe her is just the first challenge. Softhearted Tania wants to help the ghosts. First the siblings have to find out what happened to keep each ghost trapped in this world. Then they have to help the ghosts move on—sometimes by letting them take over Tania’s body. All this while dealing with their overprotective mother, a stepfather who’d want to exploit Tania’s gift, and a changing assortment of human troublemakers.

Life gets interesting when your sister sees ghosts. And the TV show’s shooting season is just beginning....

Sam Cooper had just moved to Harper’s Inlet
when he met Tony. Tony’s father owned a marina.
Sam, Tony, and Tyler took scuba lessons together.
Tony got them in for free. After they completed the
course, the boys decided to try out their new skills in
the real world…the ocean. The only problem was,
no one had permission.
While Tony’s father was away on a buying trip,
the boys took one of the rental sailboats out for their
diving adventure. Everything went well until the
biggest storm Tony had ever seen blew up from out
of nowhere, and the boys found themselves stranded
on Lost Island.
But, if they thought the worst had happened, they
were wrong. The boys discovered a secret hideout
that was used by men in high powered speedboats.
Sam and his friends knew the men were up to
something, only they didn’t know what. They had to
find a way to stop them, but how? And, even if they
did, the boys could never tell anyone about it. Join
Sam Cooper, Tony, and Tyler on their scary scuba,
ocean, island adventure.
Click here to learn more about the author, Max Elliot Anderson.
Click here to learn more about the publisher.
Posted by Boys Read at 11:19 AM No comments: 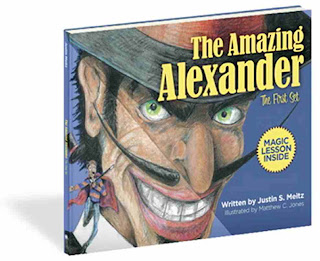 Alex loves magic. Since he was a little tyke, his grandfather amazed him with card tricks, magic coloring books, floating fireballs, disappearing bottle-caps, and magic crystal balls - and now its time for Alex to go to his first magic show. He is excited! Maybe he will even be chosen to come up on stage. When he arrives, however, a pair of mysterious eyes seem to be watching him from back stage and he nervously changes his mind; but fate steps in and takes him on a magical adventure with twists and turns and white tigers and gleaming, razor sharp blades designed to cut the victim in half - not quite what Alex had in mind!

This is no ordinary picture book series. This is an extraordinary adventure that teaches the art and ethics of magic. Each book includes a wonderful magic trick that the reader can do! The new trick Alex learns in each book, the reader will also learn. There are instructions in a secret section of this book, where Alex learns - and so does the reader - how to magically transform two one-dollar bills into a million-dollar bill.

Adults as well as youth will love this wonderful book series, illustrated with original art, which combines an exciting childhood adventure with the joy of learning and performing truly mystifying magic.