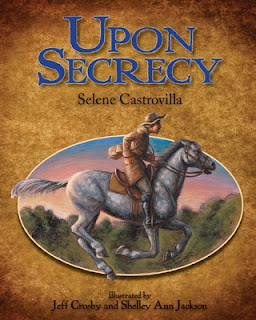 Selene Castrovilla brings a fascinating story from American history to life in Upon Secrecy, a suspenseful new picture book published by Calkins Creek Books/Boyds Mills Press. Set during the Revolutionary War, it shows how members of the Culper Spy Ring eavesdropped on the British, wrote secret messages, and fended off highway robbers to deliver crucial information to George Washington. This gripping narrative of the spies' most important mission keeps the tension alive, while period details and illustrations add to the drama. Extensively researched, the book includes a timeline, bibliography, places to visit, and even an explanation of the invisible ink, or "sympathetic stain," that enabled the spy ring to send messages undetected by the enemy.
Castrovilla's previous picture book for Calkins Creek, By the Sword: A Young Man Meets War also has a connection to the Culper Spy Ring. The book paints a suspenseful portrait of a young Benjamin Tallmadge as he and his beloved horse, Highlander, fight to defend New York against the British. As George Washington's chief of secret service, Tallmadge later organized and ran the Culper Spy Ring. By the Sword tells the harrowing dual stories of how Washington manages to save his men-and the American cause-by stealthily retreating across the East River, and how Tallmadge risks death by returning to save Highlander. Castrovilla found this account in Tallmadge's memoir, and knew it revealed an important human side of the revolution-one not usually addressed. By the Sword was a 2008 IRA Notable Book, a 2010 New York State Charlotte Award recommended intermediate reading selection, a Kansas Reading Circle recommended title, and a 2009 Moonbeam Children's Book Award gold medalist.
Click here for Upon Secrecy
Posted by Boys Read at 7:18 PM