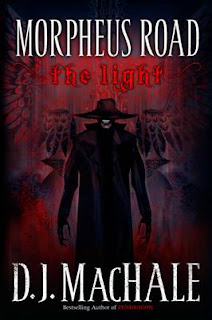 Marshall Seaver is being haunted. In The Light, the first installment of this chillingly compelling trilogy, sixteen-year-old Marshall discovers that something beyond our world is after him. The eerie clues pile up quickly, and when people start dying, it's clear whatever this is--it's huge.
Marshall has no idea what's happening to him, but he's soon convinced that it has something to do with his best friend Cooper, who's been missing for over a week. Together with Coop's sister, Marsh searches for the truth about what happened to his friend, ultimately uncovering something bigger than he could ever have imagined.
D.J. MacHale is the author of the #1 New York Times bestselling Pendragon series. He has written, directed and produced many television series and movies for young people including ARE YOU AFRAID OF THE DARK. His work has been seen on Nickelodeon, The Disney Channel, HBO, Showtime, PBS, Discovery Kids and the broadcast networks. D.J. lives with his family in Southern California.
To win a signed copy of The Light, send us an email and we'll enter your name in our FREE book drawing.
Click here for Morpheus Road's movie trailer.
Click here for MacHale's website.
Posted by Boys Read at 4:41 PM

Thanks for the heads up on this one. MacHale isn't my favorite author, but his other series is popular in my library, so I should really look into this!