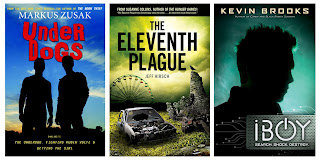 Before the attack, Tom Harvey was just an average teen. But a head-on collision with high technology has turned him into an actualized App. Fragments of a shattered iPhone are embedded in his brain. And they’re having an extraordinary effect on his every thought. Because now Tom knows, sees, and can do more than any normal boy ever could. But with his new powers comes a choice: Seek revenge on the vicious gangs who rule the South London housing project where he lives, and who violated his friend Lucy? Or keep quiet and move on? Not even the search engine in his head can predict the shocking outcome of iBoy’s actions. A wifi, thriller by YA master Kevin Brooks.
Click here for a very cool iBoy trailer.
To win a copy of all three books, enter our FREE BOOK drawing by clicking here to access our home page. Look for the FREE BOOK entry link. Drawing only valid for the month of November.
Click here to order these three boy-centric books.
Posted by Boys Read at 8:11 AM