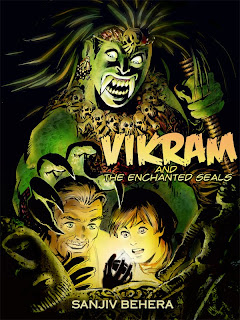 Vikram, an apathetic kid from California, doesn’t want to be in India. But a death in the family leaves him no other choice. So he finds himself in a rural village, at his ancestral home where he meets his imposing grandfather. A special bond forms between them, and the old man gives Vikram an enchanted seal – a mystical relic from India's earliest civilization. It turns out that the seal is one of only a handful that combine to form the Dharma Cube, the most powerful weapon against evil the world has ever seen. Before Vikram can fully grasp the seal's profound significance, Grandpa is taken by Rakshasas – evil giants from the epic Ramayana – who are intent on destroying the Cube once and for all. Vikram enlists the help of younger brother Jai, and Manu, the family’s loyal servant, to search for Grandpa. Their journey takes them through the various landscapes of India: historical, mythological, artistic, philosophical, and natural. Tension mounts when Vikram realizes that he alone must unlock the secrets of his seal and the Dharma Cube, not just to rescue Grandpa, but to save all of humanity.
This very cool book is by Sanjiv Behear. Sanjiv was born in October, 1969, to Indian immigrant parents in Manitoba, Canada. He and his family moved to Southern California when he was four. Some of his fondest memories involve spending summer vacations lounging on the sands of Redondo Beach.
His family moved often, to various spots in California, both southern and northern. He spent his college years at UCLA, where he studied economics and anthropology.
Sanjiv has a strong affinity for eastern mythology, comics, basketball, and pizza. Currently, Sanjiv resides in Arizona with his wife and four children.
Click here to learn more.
Posted by Boys Read at 8:32 AM