The Haunting of Nathaniel Wolfe 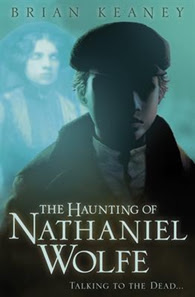 Few writers get recommended by Philip Pullman, and Brian Keaney is one of them. I actually sensed the ghost of Dickens within the first few chapters. If you're looking for a new writer, I highly recommend Mr. Keaney.
Below is what the The Haunting of Nathaniel Wolfe is all about:
Up there on the stage beside his father was a shadow, a shape, blurred at first but becoming clearer with every passing moment until finally he was looking at the figure of a woman, dressed in a long white robe. Her eyes were the palest blue and they were fixed directly on him. With every fibre of his being he knew her for what she was: a ghost. Hers was a life that had departed its earthly body but was not yet prepared to release its grip on the world for ever. There was unfinished business she yet had to perform. But why, out of all the millions of individuals on the face of the planet had she chosen him for her haunting?
1862. London. Outside a dingy theatre in the East End of London a line of people waits silently. It is cold enough to chill your bones, but they are not deterred. They have been drawn here by the promise that on this night the dead will speak from beyond the grave.
Twelve year old Nathaniel sits in his place by the door taking their money. For him it is just a job. He does not believe in spirits. But he will soon be forced to change his mind for when the hall is full and the doors are shut Nathaniel’s life will change forever.
Click here to learn more about Brian Keaney.
Posted by Boys Read at 7:35 AM