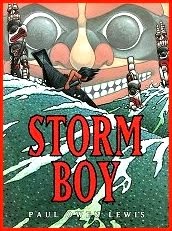 On this wind-stormy day in Seattle, I can think of no better book than Storm Boy.  This week, not far from my home, Orcas have been hunting and frolicking off our shores.  A pod performed a mysterious display of delight as a ferry loaded with ancient native artifacts neared Bainbridge Island, WA.  Suquamish Tribal Chairman Leonard Forsman said the whales were “welcoming the artifacts home as they made their way back from Seattle, back to the reservation.”  To learn more about this interesting story, click here.

Here's the Storm Boy plot: In the storm-tossed seas along the rugged Northwest Coast, an Indian boy is thrown from his canoe into a great mystery. Washed ashore before an unfamiliar village, the boy finds his arrival has been eagerly awaited by the strange and giant "people" there. Just who are these beings? And what do they intend for their guest? What follows both answers-and deepens the mystery.

Careful attention is paid to historical detail both in the story and the vibrant illustrations. Storm Boy follows the rich mythic traditions of the Haida, Tlingit, and other Native peoples of the Pacific Northwest Coast, whose stories often tell of individuals cast mysteriously into parallel worlds inhabited by animals in human form.

A portion of the proceeds from this book is donated to the Haida Gwaii Rediscovery Program for tribal youth.

Click here to learn more about Storm Boy.
Posted by Boys Read at 10:24 AM

Life is the fire that burns and the sun that gives light. Life is the wind and the rain and the thunder in the sky. Life is matter and is earth, what is and what is not, and what beyond is in Eternity. See the link below for more info.

i have joined your feed and look forward to seeking more of your post.

I admired those who has able to create a blog as wonderful as this! You are truly a hard working person. Keep up the good work and keep on posting.

I really enjoyed reading your article. I found this as an informative and interesting post, so i think it is very useful and knowledgeable. I would like to thank you for the effort you have made in writing this article.

Taking risk is not bad as long as you know that you can handle it right and make sure you don't regret at the end. Visit my site for more information and thanks for your wonderful article it did helped me a lot.