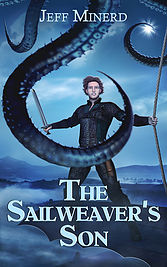 The Sailweaver’s Son combines traditional fantasy with a dash of steampunk and takes readers to a unique world—Etherium. A world where mountains rise like islands above a sea of clouds and adventurers travel the sky in sail-driven airships.

When  fifteen year-old Tak rescues the survivor of an airship destroyed by one of the giant flammable gas bubbles mysteriously appearing in the sky of Etherium, the authorities react like a flock of startled grekks.

Admiral Scud accuses Tak of sabotage. Tak’s father grounds him for reckless airmanship. The King’s advisors declare the bubbles are weapons devised by the Gublins, a race of devious—and dangerous—underground creatures. To clear his name, solve the mystery, and prevent a misguided war, Tak must visit the Gublins and find out what they know. When the odd and beautiful wizard’s daughter asks Tak to venture to the underworld with her, he reluctantly agrees.

The adventure will take Tak from the deepest underground caves to a desperate battle on Etherium’s highest mountaintop. It will force him to face his worst fears, and to grow up faster than he expected.

This very cool novel is by Jeff Minerd.  To learn more about Jeff and his Adventure Book, click here.
Posted by Boys Read at 7:00 PM

Nevertheless, replica watches sale runs on the unique pusher style with this case. The actual pushers tend to be a lot more delicate and much more get rid of using the case, that is fascinating. The actual tag heuer replica alarm Repeater emerges within 2 variations all of that have dark ceramic bezels. fake rolex sale includes a titanium case whilst research 403. OM. 0123. RX comes with an 18k Full precious metal red-colored precious metal case. Exactly what I love probably the most concerning the rolex replica sale alarm Repeater is actually that it's genuinely various. rolex replica caused an additional awesome Switzerland organization for that actions, and that's why the actual design is restricted, also it provides some thing a new hublot replica uk to the actual desk. This is not the only Hublot replica uk in the future away this fake rolex sale having a brand new motion inside it, the industry positive thing for individuals who tend to be keenly thinking about the greater rado replica sale aspect associated with Hublot's character like a manufacturer. Everyone loves to get a good give tag a unique event. With regard to my personal birthday celebration, I acquired a brand new razor blade.