Casualties of war: How many is too much? 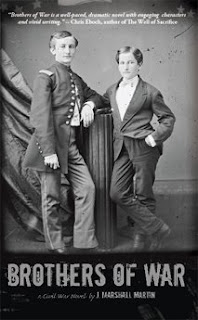 Casualities of war: How many is too much?   It's Memorial Day weekend, 2008.  How many of us stop to actually pay tribute to the men and women who have paid the ultimate sacrifice for their country?  I'm the first to admit that I don't.  However, today I paused for a few minutes to at least educate myself on the difference between Memorial Day and Veterans Day.   Ask this question to your friends and family members: What's the difference between Memorial and Veterans Day?  Very few people can answer this simple question.   Memorial Day is to honor those Americans who actually died during an American war.   Veterans Day is to honor all those who served in the Armed Forces.

I have written a novel for boys about America's Civil War. The novel is called, Brothers of War. It's been estimated that around 620,000 Americans died in this tragic conflict. Click here for a breakdown. As of fall 2007, experts have estimated that over 1 million civilians will have died in Iraq. Click here for more information.

More than 4,000 US soldiers have been killed in Iraq since 2003. Click here for chart. How many is too much? If we worked at a peace process with a fraction of the energy and vigor we apply to war, the world would be a better place. I'm a firm believer that we must continue to teach American boys about the realities of war. Young men in America are bombarded by powerful and alluring advertising that appeal to a boy's fantasy of becoming a mythic war hero. Click here to visit Boys Read's War and Peace page.There are no easy answers. However, if enough of us try, we can evolve as peacemakers. If we don't evolve, America's sons and daughters will continue to die in futile military conflicts around the world.
Posted by Boys Read at 11:00 AM