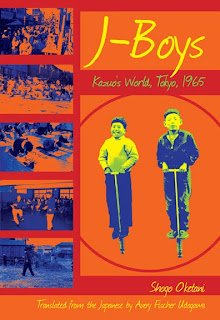 While their parents can't stop talking about how hard Japan had it during the war, all nine-year-old Kazuo Nakamoto and his friends want is to be Olympic runners, drink real rather than powdered milk, and eat hamburgers like Wimpy in Popeye. Set in working-class Tokyo in 1965, the fifteen interlocking stories in J-Boys illuminate daily life in the period of rapid postwar economic growth, including a widespread fascination with Western culture and the economic and psychological repercussions of World War II on the next generation. Young readers will be fascinated by the intertwining lives of third-grader Kazuo, younger brother Yasuo, and classmates Nobuo, Minoru, and Nishino. In moving and lyrical prose, J-Boys also broaches important social issues like prejudice against ethnic Koreans and the struggles of rural farmers.
This authentic book is by Shogo Oketani. Mr. Oketani was born in 1958 and raised in Tokyo. Following studies in the humanities at Keio University, he became an active writer and translator. He will be touring the U.S. in August.
Below is some great Rave for J-Boys:
“J-Boys gives readers a chance to time travel . . . Rich with details of day-to-day life in 1960s Japan, and enhanced with photographs and notes, J-Boys offers deep and lasting insights into family and school life, foods, seasonal rituals, and the all-important sense of community.”
—Holly Thompson, author of Orchards, The Wakame Gatherers, and Ash
“Boys, boyhood, innocence, and friendship in the rich landscape of Tokyo, 1965 . . . a fascinating and endearing work.”
—Graham Salisbury, author of Under the Blood-Red Sun, winner of the Scott O'Dell Award for Historical Fiction
“These stories are a sushi plate of delicious morsels, consisting of all flavors: sweet, salty, bitter, sour, umami, and hanbaagaa. Deftly told and delicately translated, these stories capture the crazy aspirations, the naughtiness, the tenderheartedness, and the irrepressible spirit of the J-boys.”
—Margi Preus, author of Heart of a Samurai, a 2011 Newbery Honor Book
“Shogo Oketani's intimately detailed view of life, through the eyes of young Kazuo, captures the excitement of the 1960’s westernization of Japan while at the same time delivering the penetrating sorrow of an ancient culture slowly slipping away.”
—Satsuki Ina, PhD, documentarian, Children of the Camps
“Here, created with affection and skill, is the whole lost world of the present generation, that childhood the memory of which still lives within us.”
—Donald Richie, culture critic and author, The Inland Sea
To learn more about J-Boys, click here.
Posted by Boys Read at 5:24 PM

Ooh. This looks really interesting. I still have Cavanna's Jenny Kimura about the plight of Japanese Americans in the 1950s and 60s, but this sounds fascinating.

This is a fantastic book, highly recommended for boys, girls, teachers and adults. Thanks for posting this. The narrative and characterizations are great, and footnotes and sidebars give great explanations on Japanese culture and history too.