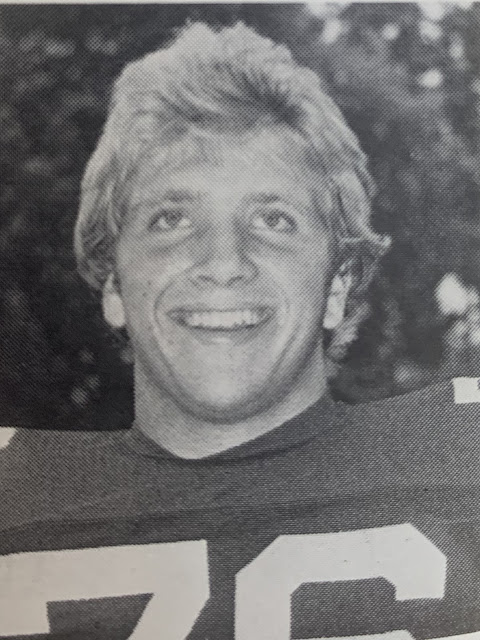 The Offense Continued. The Receivers. The Guards. The Running Backs. Their Jersey numbers stay with me as my old friends. Whenever I go into a Men’s Locker Room each every number reminds me of our Players. I see locker #31 with a lock on it and say “Oh Barrack’s taken. I see #21 and say “Monger’s taken, too.  Then I see #7 and say, “Cook” is available. As I opened this series of Post, I said it was Love that made this 1980 Team special. You might call it a collective Bromance. It was indeed an extraordinary, camaraderie, a spirit of friendship as good as it gets. This type of bond was achieved by us boys having endured rigorous, demanding, strenuous practices for months on end. In Winter, inside, we ran the stairwell until we puked. In Spring, Summer and Fall, outside, we ran “The Banks”—the steep hill that leads down to Ben Martin practice field until we puked. We practiced in blistery heat, rain and much of the time in the dark. We once even practiced at Skid’s Farm. There was an East Tennessee late Spring snow on the ground. Emory wanted our pads on so we could go full-speed and hit hard. The Call was made to head to Skid’s Farm. We all showed up and helped Skid move a Vintage Single Prop Tail-dragger, an airplane that landed by dragging its tail. Underneath the Airplane Hanger was raw dirt. We stacked bails of hay to form sidelines. That’s the happiest I ever saw Coach Brewster. A farm boy himself from Lenoir City—he was besides himself to conduct defensive drills on dirt surrounded by bails of hay. That was a strange day. Of course, Skid loved it. It was huge fun for him. He got to host all us boys at his favorite place in the world, The Skidmore Farm. Here’s a direct quote from #31, David Barrack: “I can tell you at West Point we NEVER had practices as hard as our time at OR.”

The Receivers: #84 Mark Berry ran like a Gazelle. It was beautiful to watch. He ran fast with grace and ease. There wasn’t any sign of effort or struggle in his long stride.  Doug Martin would loft perfect, spiraling balls and Berry would glide right under them. Mark once launched our entire sideline into complete mania when he dunked the football over the crossbar after scoring a touchdown against arch rival Farragut. Like Monger, a super talented athlete from Woodland. Smart too and just a fun, nice guy to be around. Mark also excelled at Baseball and was one of our few athletes to play two Varsity Sports. Mark went onto Tennessee Tech on a scholarship. When Berry wasn’t catching touchdown passes, #13 David Hall was. David a speedster was one of the fastest guys on the team. He was also the Place Kicker. I don’t remember David ever missing an extra point. He could have very well been our highest scoring player in 1980. He knocked out over 42 consecutive extra points with ease. A perfect Gentlemen. This World desperately needs more men like David Hall. We all wish you Godspeed in your health recovery, Brother. Other Senior Receivers were John Shannon and Jeff “Butters” Rich. #87 John Shannon recently shared with me that the dedication and discipline that was instilled in him while playing as a Wildcat has helped him through his entire life. Butters sent our entire sideline into euphoria when he scored a TD against Campbell County. Gary Quincy played some Tight End, too.

The Guards. #54 Mark Stokes had two powerful Guards to his left and right. # 63 Ron Jackson (Jax) on the right and #60 Bart Brinkman on the left. Chick Graning’s Offense called for pulling Guards and Brinkman and Jackson cleared a lot of holes Pulling. Like I said before, us Tackles have a special respect for each other. The same respect occurs with the down lineman who plays ball next to you. You are as if one man at times. We speak of the Right Side or the Strong Side of the line and we speak of the Left Side or sometimes called the Weak Side of the line. Bart and I made up the Left side. The Offensive Tackle and Guard relationship must be strong. As far as I can tell, Bart was one of the all-time best Guards at ORHS. He started as a Junior in 1980. He went on to earn a scholarship to the University of Richmond. The Brinkman family has a rich legacy when it comes to Oak Ridge football. Bart’s Father, Skippy played on the 1958 State and National Championship Team. On the Right side of the line, was James Schaffer and Ron Jackson (Jax). Ron, a very talented songwriter and musician was a sturdy Guard. Once Coach Graning devised a secret weapon against Farragut called the “Mouse Trap.” It was created to Trap Block a formidable Defensive Tackle for the Admirals named Barry Mauser. Mauser was probably one of the best Defensive Tackles we ever faced. Now I’ve said Doug Martin never got sacked and I’ve said he rarely got sacked. Mark Twain once said “Never Let the facts get in the way of a good story.” Right now, I’m going to stick with “Rarely.” As I do recall, Barry Mauser actually did sack Doug once in the big Farragut game. Mauser is probably a very nice Gentlemen today, but we hated him back in-the-day. He was a loud, trash talker on the Field. So Coach Graning, being the Genius that he is, came up with the “Mouse Trap”. A play designed to shut Mauser’s trashy Mouse Talk. I have no idea how it actually worked. As I understand Graning’s complex Splits, he somehow tricked Mauser to commit to a hole by Splitting Ron Jackson out a bit, and then clobbered him by Pulling the Mighty Bart Brinkman over to the Strong Side. I think The Mouse Trap also called for the Full Back, Zulliger or Barrack or maybe even both to pound Mauser into Mince Meat with second and third blows.

The Running Backs. The 1980 Team had Senior depth.  Besides, Monger, Barrack and Zulliger, we had #22 Harvey McKay and #33 Houston (Hoss) Singletary. Harvey kept our Team pumped-up. He was really inspirational and most definitely the most popular guy on the Team.  Everyone loved Harvey. He was great on Special Teams. Likewise, #33 Houston (Hoss) Singletary was fantastic on Special Teams and just a super nice guy. Mac Cook, another two Varsity sports guy, played Full-Back and Baseball.

That’s all of the Boys on Offensive. Next we move to the Boys on Defense. The picture is of #76 Dwight Skidmore (Skid). One for the five Captains of the 1980 Team.