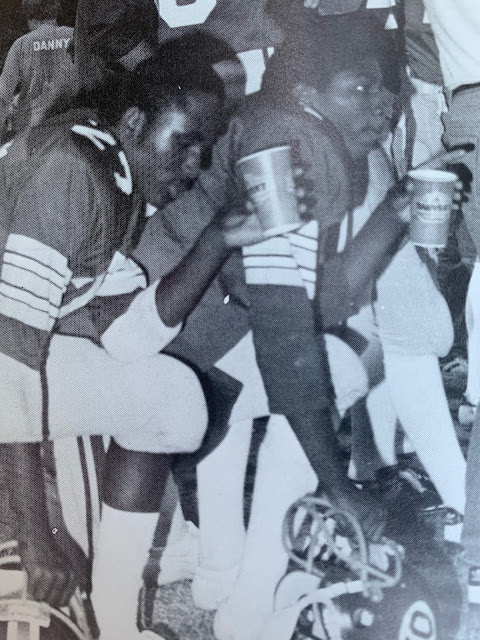 The Defense Continued. Skid’s scores and Spratling Sticks Clinkscales. Clinkscales. I tremble when I hear this name. It’s venomous. It’s a name worthy of a Star Trek episode: “Captain Kirk, prepare the bridge, a Clinkscales has been detected.” Emory said this name over and over before our first playoff game with Austin-East. “Clinkscales does this. Clinkscales does that,” Emory would say. Emory just wouldn’t shut up about this guy. I would have Clinkscales’ nightmares and see a Half-Snake, Half-Man covered in riveted sheet metal scales of body armor. An Opponent of mythic proportions and Public Enemy Number One of our first 1980 playoff game.

Dwight “Skid” Skidmore, #76. One of the five Captains of the 1980 Team would score 6 against Clinkscales. Skid was born Tracker-Pull strong. Sometimes he would just take the football away from Running Backs like an adult taking a toy from a child. Other times, Running Backs would slam into him, stumble backwards and loose yardage. This is pretty much what happened when Skid scored his TD. An Austin-East Running Back ran into Skid, the ball jarred loose and landed right in Skid’s hands. The ball had been deep in Austin-East territory and Skid didn’t have far to run for a TD. The only thing between him and the goal line was Clinkscales. Now Clinkscales played QB and Strong Safety, so he knew how to tackle. Yet what he saw running toward him was unlike anything he had seen carrying a ball before.  Big #76 was charging straight for Clinkscales carrying the football as if it were a chicken. Clinkscales was used to seeing backs like Monger making moves and doing fancy footwork. Skid wasn’t trying to evade Clinkscales at all.  He was charging Clinkscales, laughing like a suicidal madman. Clinkscales squatted and prepared to lay an open-field tackle on Skid. When they made contact, Skid pulverized him. Skid ran flat over Clinkscales, entered the end zone and raised the ball victoriously. Our bench erupted.  We knew we had just witnessed something special.  Our big Defensive Tackle scored 6 points.  And that’s the night folks that Skid scored a TD. Nothing and I mean nothing was going to stop Skid from scoring his one and only TD.  That was the greatest score of 1980. You can’t think of the 1980 State Champions and not think of #76 Dwight Skidmore. One of the five Captains of the Team.

Now Clinkscales had a crappy night. Later in the game, Clinkscales broke loose on an outside option.  It looked like for sure he would score. Then #27, Larry Spratling came across field, managed to somehow get directly in front of Clinkscales and jackknifed him to a dead stop.  Larry picked him up and body slammed him. Again, we went nuts on the sideline. That was the best Stick of 1980. Larry was a tremendous Safety and excellent all around talented athlete who also played Varsity Basketball.

We went on to score 54 points. I think we had a total of 7 Touchdowns. We wore Clinky out. The greatest complement I received that Football Season is when Clinkscales said to me, “You again!” I was in his face like a horsefly from Skid’s Farm all night downfield blocking. Each time Clinkscales tried to reach one of our Running Backs, he had to deal with me pestering him. I never got a clean shot to lay him out, but he knew my number by the end of the best game we ever played.

All the things we wore were pretty easy to figure out how to put on right. Take a jock-strap for instance. I never saw a guy standing in a locker room befuddled by how to put on a jock-strap. They’re very straightforward. You see the pouch and quickly figure it goes in front. It’s got a waist band that fits just like underwear and you slip your legs through the two elastic leg holes. I’ve never seen a guy put a jock-strap on backwards. Thigh pads however are a totally different story. They have a pointed flare. There’s special sockets inside your pants for thigh pads to be inserted. There’s one that flares out to the right flank and one that flares to the left flank. If you put them in the wrong side, they form pinchers right at crotch level. If a new guy puts them in backwards and I guy like Larry Spratling hits them hard enough, that pinch point at crotch level could very well pinch a Tally-wacker. Picture is of Larry #27 and his good friend, David Hall. Defense Continued in the next Post. Still to come Outside Linebackers and Corner Backs.