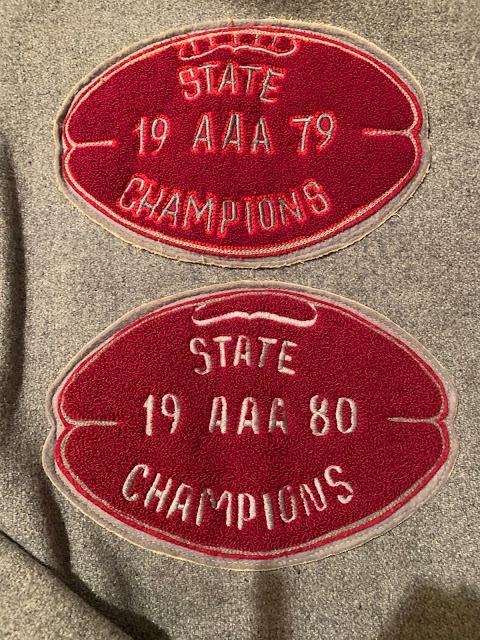 The Offense. A special Alchemy mixed. The Boys from Jefferson and the Boys from Robertsville perfectly coalesced.  On Offense, The Boys from Jefferson were: Scott Monger, David Barrack, Doug Martin, Mark Stokes, Mark Barry, James Shaffer, Bart Brinkman and myself.  We eight already possessed an appetite for undefeated seasons. 42 years ago, in 1978 while at Jefferson we had an undefeated season. Ah 1978, Staying Alive-Staying Alive.  Click here for a 70’s Flashback before reading further https://www.youtube.com/watch?v=OkB6btftMl4

Out of the eight Boys from Jefferson, five of us hailed from Woodland.  Woodland was a Boys Club Powerhouse and had many great coaches.  Bruce Foster’s Dad was the Vince Lombardi of them all.   On Offense, The Boys from Robertsville were Bill Zulliger, David Hall, Ron Jackson, Gary Quincy, Harvey Mckay and Houston (Hoss) Singletary.

I’m going to speak to all of the Defensive Seniors as well, but will focus on the Offense first.   Let’s start with Woodland’s Allstar, Scott Monger, #21. Scott didn’t look for holes—he made them.  He possessed an uncanny ability to lower his head and turn himself into a human torpedo.  Once he cleared the line of scrimmage he would rise up and zigzag down the open field with unbelievable vision.  It was as if he had eyes on the side of his helmet.  These traits are what made Scott a lethal tailback.   More than once, I was the victim of a direct hit from Scott’s lowered head.  If I was out in front of him blocking and in his Torpedo Path, his helmet would lodge right into my back.  I learned not to take it personally, but did it ever hurt.  Trying to argue who was the overall best football player on the 1980 Team is a futile attempt at best.  If the list got generated, Scott would be at the top.  He was a star Running Back and played Strong Safety as well.  Scott was awarded a scholarship to Austin-Peay and continued on with the phenomenal Coaching Staff for another four years.

The Dynamic Duo: #31, David Barrack and #47, Bill Zulliger  These two formed their own Nuclear Reactor. If anyone ever looked the part of a High School Football star, it was Barrack and Zullliger  Strong, fast, smart.  They were formidable blockers as well as a  running threat.  You can’t mention #31 Barrack without thinking of #47 Zulliger.  Coach Brewster and Coach Graning fought over them and they both won.  They became something of a revolving door, flipping from Offense to Defense.  You might find both of them Playing inside Linebacker in an Oklahoma 5-2 Defense.  Either could play Middle Linebacker (“Mike”).  Coach Brewster loved Barrack as Nose Guard, too  It must have made Opponents heads spin when they tried to study Barrack and Zulliger on film.  Watching them rotate was more confusing than trying to figure out Coach Graning’s Offensive Splits. These two guys were truly All-American Boys and Army snagged them as inseparable twins. They both went on to West Point.  Very impressive.