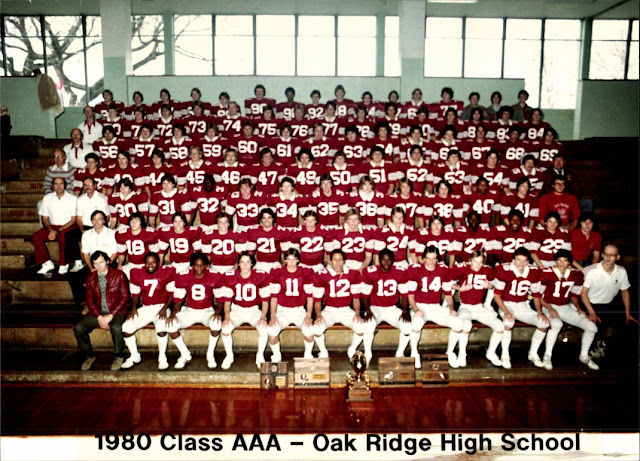 The Defense Continued. 1980 Team Picture. What a good-looking group of young men we were back-in-the-day. I miss you All. I wish I could write about every single person in this photo. I wish I could write about all my other great friends like Scott Rouse. The Rouse Chronicles are for another day. Every person in this photo contributed to the 1980 State Championship. An amazing, talented group. It’s time to wrap this Series up. I’m going to do only one more Post after this one and the last one will be short and sweet. When I started this Post Series my goal was to recognize the Coaches and the Seniors. That’s been my primary focus. From my point-of-view, I still need to closeout covering the Defense, Speciality Kicking Team and bring us to a final summation. Before I move forward though, please join me in a Moment-of-Silence to pay our respect and honor the four members of the 1980 Team who departed before us: Matt Quick (Trainer). Players: Cliff Russel, Jimmy Campbell and Charles Roach. RIP Brothers.

Back to those three Corner Backs. I already mentioned Bruce Foster and his family legacy of Football fanatics from Woodland. Two additional Corners were #7 Randall Cook, our man with a million-dollar smile. Always outgoing. A tremendous QB himself who could run a Heck of an option. Randall had a nose for the ball on defense and was really tough to beat on a pass pattern. I once tried to get Randall to sell Amway for me. He was to be the first person to join my multi-million dollar Soap Selling Machine. He was nice enough to hear me out, but would not sign on the dotted line. Only Kari Schlafke’s Mom bought one box of soap. I failed at Amway. I was forced to go to College. And #35 Gary Quincy, our Great Outdoorsman—Spear-fisherman extraordinaire—better Trapper than Jeremiah Johnson and extremely versatile Football player. Gary could snag Pop-passes out of thin air when playing Tight End. As Corner, he was on the right side, always behind Skid and could stop a running attack on a dime. Gary could run like a Deer and that speed served him well running Track. Our Outside Linebackers were #86 Richard “Dick” Anthony and #23 Brad Miller. #53 Mike “Rocky” Blair could play Outside or Middle. Coach Brewster is the one who affectionally called Blair “Rocky” after the famous Pittsburg Stealer star, "Rocky" Bleier. #53 our Rocky Blair was a really solid Linebacker. Even though I was an Offensive Lineman, I trained with the Linebackers much of the time as a backup Linebacker. I really enjoyed pre-game warmup exercises with Mike. We passed a ball between us practicing interceptions before each game. #86 Richard “Dick” Anthony was Mr. Consistency. We all loved to call Richard “Dick.” Boys will be Boys and we said “Dick” with great vocal variation. We said immature things to Richard like “What’s up, Dick?” with amused pleasure. Richard was a good sport and never flinched. If I said “Dick” today, every member on the 1980 Team would know who I was referring to, our beloved, Dick. #23 Brad Miller was not just another pretty face. Brad was known for his good looks and his modeling jobs in Knoxville. His crowning achievement of good looks was winning the Dukes of Hazard Look-a-Like Contest and driving away with a big orange replica of the General Lee. What a lot of people might not know about Brad is that he was really strong and a Brown Belt in Judo. I learned this the hard way in Varsity Practice on the 1978 Team. We were Sophomores. During a two-a-day practice, Brad and I got into a little scuffle during a Linebacker drill. Coach Brewster loved it when we heated up and would allow us to go at it as if we were hockey players. Brad used a tricky Judo move on me and body slammed me to the ground. We were great, respectful friends from that day on. To this day, Steve Fitchpatrick reminds me of the day Brad got the best of me. Darn it! I didn’t know he knew Judo.

Special Teams Kickers: The two Senior Speciality Team Kickers were Jeff Lewellyn and Mike Henderson (Hendoo). “Hendoo” can’t just be read. You have to hear someone like Mark Berry say it to fully appreciate the beauty of the “Hendoo” sound. Jeff did a great job kicking Field Goals. Mike was a Punter and another great guy from Woodland. We were lucky to have Jeff and Mike as two of our Kickers. In 1978, when we were all Sophomores our Kicking Game outlook was dismal based on our JV performance.

One of the funniest stories is when John Carroll was attempting a Field Goal in a JV game. John stepped up and kicked the ball with his long leg and it shanked off to the far left like a wounded duck. His Cleat came off his foot and went straight through the uprights for three points! Our bench found this hilarious and it was the highest point of achievement for our JV Squad in 1978. We made the Bad News Bears look good. John Carrol never lived this down. We all learned to love John. Larry Rivas and I hated John Carrol and Steve Fitchpatrick when we first meet them.

While still in 9th Grade, they got invited to one of Kathy Hurley’s infamous house-parties. Man, those were fun. Larry and I didn’t appreciate Carroll and Fitchpatrick encroaching on our Jefferson Girls. How did these two Robertsville Boys get over to our side of town in the first place? I think Laura Marshall invited them. Larry and I found them obnoxious. Steve could dance like John Travolta and John. Well, a man who needs no introduction. John went crazy over my girlfriend, Carolyn Lovelace. I didn’t like that at all. Larry and I did a pretty good job of defending the Jefferson Turf. Eventually, the Robertsville Boys wised-up and started hosting parties on their side of town. The Zulliger’s hosted fantastic parties and that’s how Bill, #47 and one of the Captain’s of the 1980 Team stole Marsha from Jefferson. In the end, we all became close friends. It was indeed a rocky beginning.

Now I’m going to start an argument. What Team was the All-time ORHS best? Was it 1958, 1975, 1979, 1980, 1991? If I brought this sensitive topic up at Big Ed’s Pizza it could possibly end in a friendly way or it might not. If I brought this up after Midnight at a local Watering-Hole, it would start a bar fight. This is a very serious and sensitive topic in Oak Ridge and should never be discussed when Wildcat Fans are intoxicated.

I think the only way to definitively answer this question is to turn it over to the Cray’s Super Computer at ORNL. A group of Computer Scientist could develop an algorithm and feed it to the computer. I imagine though ORNL is working on more important scientific discoveries.

So we’re left with anecdotal speculation. Sure, I’ve heard the 1958 argument. We won by a much wider point margin—“We were the National Champs”, the Grumpy Old Dudes say—blah, blah, blah. Move over Old—Old School Guys. This logic is outdated. I’ve heard it argued that the 1979 Team played a tougher regular season lineup and had to travel to more out-of-town playoff games and that the travel was long distances. In comparison the 1980 Team played an easier regular season lineup and had more Home Field advantage playoff games. Those are interesting, subjective points, but don’t win and they sound a wee-bit like whining. I’ll argue that the 1980 Team went up against four players that eventually played in the NFL. Austin-East sent 3 Stars to University of Tennessee and all 3 made it to the NFL: Joey Clinckscales was one of them. Don’t feel sorry for him, he eventually made a lot of money. Reggie and Raleigh McKenzie, the twin behemoths were the other two from Austin-East. We also went up against an incredible Running Back from Warren County, Jeff Womack. Womack played for Memphis Tigers and made it all the way to the Minnesota Vikings. Every argument is flawed. That’s why it’s easy to end up in a bar fight or food fight if you’re at Big Ed’s.

For me, the best team ever was 1979-1980. I argue this is only One Team. One Team that won 22 consecutive games and 2 State Championships and was ranked number 3 in the Nation in 1980. The 1980 Opponents were much stronger and faster than the 1950 Opponents and therefore point-spread is a neutralized argument. Ha! The Coaching Staff was exactly the same in ’79 and ‘80. Many of the players were exactly the same. The Seniors on the 1979 Team were like Big Brothers to the 1980 Boys. The 1980 Team were like Little Brothers to the 1979 Seniors. Everything I have written about the 1980 Team applies directly to the 1979 Team. I could write the same admiration about the ’79 Seniors like Jim Kolopus, Jimmy Norman, Donald Sumner, Larry Hamrick, Chuck Mathews, Johnny Burgress, Keith Palmer to name only a few. Please note, if this starts an argument, I will not reply and rebut online. If you live in Oak Ridge, you will not be able to assault me without driving 2,549.4 miles to the Pacific Northwest. It’s not worth the cost of a plane ticket to track me down. I’ll deny everything. It’s only High School Football, so Chill-out.