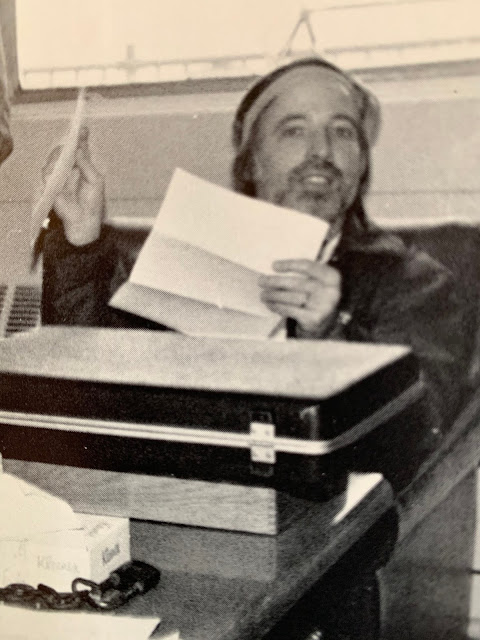 The Defense Continued. No one took more pride in being a Wildcat than Bruce Foster. It was sacred. The Foster Family took Football serious. It was a Family Enterprise. As mentioned earlier, Mr. Foster was the Vince Lombardy of Woodland Football. He helped mold great players like Scott Monger, Mark Berry, and Bruce Foster. #24 Bruce Foster played Corner Back. Besides Bruce, the Corner Backs were #7 Randall Cook and #35 Gary Quincy. Tremendous talent amongst this trio. These three were always ready for Game Day.

Game Day was Holy Ground. It was serious business. The entire Teaching Staff, love Football or hate it, had to align with Football’s nuances. Football Players had privilege on Fridays. We got dismissed from school early so we could go home and rest. And we did. There was no screwing around. I would go home, go to my bedroom and close the door. We had ritual. An anxious tension was the connecting thread of our ritual. Monday, Tuesday, Wednesday were intense practices. Thursday was film day where we studied our enemy. Friday day morning you woke up with butterflies. You felt queasy throughout the day. You saw your fellow players in the hallway and in the classroom. Nothing was said. Only a nod or a look. An energy followed between us as if we young men would die or live one more Friday night. We feared losing more than we desired winning. Emory sat the tone for this religious experience. Please don’t misinterpret this. This atmosphere had nothing to do with Faith or a single religion. To outsiders, I’m sure at times parts of our ritual looked like Religion. If this zeal had been about Religion, Emory’s Quest would have been legally crushed. It was about the sacredness, the seriousness of winning and the spirituality of winning. When you saw Emory in the Hallway on Fridays his step was different. Winning was in his every movement—something in his body movement said, “I’m ready-bring it on!” All day on Friday, the Big E’s energy was about winning. I never saw this, but I remember players saying that Emory would sometimes vomit from anxiousness in the locker room at Blankenship before a big Home Game kickoff. I believe it. Writing this makes me feel like I might have an Ulcer. Religious experiences can occur in many types of environments. When you break all Sports down to their raw infancy, Games are about life and death. The winner lives. The loser dies. That’s why fans are fanatical. The symbolism of Sports is deep in our instinct to survive, to overcome, to go to battle, to be victorious. In the history of ORHS Football, no one pushed this fanatic fervor further than Emory Hale. I personally love this about Big E. A man of intense conviction. He pushed the boundaries of conventionality. He was a Wild Man. This photo is from his office. Don Bordinger, a man of great conventionality is looking at Emory with apprehensive discernment. Big E taunted the establishment. Bordinger, Dr. Smallridge, the other members of the School Board could not tame his Wildness. Big E is a Rebel. We Wild Boys were willing to charge a hill under enemy fire and risk our lives for our Rebel Leader. This is what True Leadership looks like. Emory achieved this by being one of us. He was a Wild Boy, just like us Wild Boys. We were living Lord of The Flies. He often would pick up a piece of gum from the ground that a player spit out before inserting their mouth piece and chew it himself. Boys love repulsive, immature adult behavior. E was the Master of this. He would pick a scab and eat it. To fire-up his Troops he once ate an Earthworm. At Campbell County, after a Smoky Mountain soaker, he led the entire Team with a belly-dive into a shallow pond of water that covered the field. We all dove in right behind him. It was fantastic fun! Emory wore a Samurai Headband and refused to shave. All these are the traits of a great Wild Man. Now go back to the ’81 Oak Log and look at Bordinger’s 1950’s establishment hair. I presume that this man tried like Hades to get Emory to be just a little more conventional. Emory wouldn’t budge. Why should he. He was winning and that’s what the Oak Ridge Community at-large demanded him to do.

Emory had strategically outmaneuver the OR establishment. He had built a Tribe of Wild Boys willing to do battle for him. He had the allies of his strong coaches and most importantly he had won the battle of the heart of our Mothers. Folks, that was the little something extra that made this a religious experience.

Make no mistake, we were Momma’s Boys. We belonged to our Mother’s. We weren’t grown men. This was Emory’s Genius. His Elixir. He had a gift for uniquely connecting with our Mother’s. He did not try to take us away from them to use us to meet his self-absorbed agenda. He embraced us in Love and our Mother’s knew that he loved us like he loved his own girls, Karen and Angie. Our Mother’s reciprocated this love. Our Mother’s understood, Emory would never harm us physically or psychology. There’s no better example of this than Emory’s relationship with David Barrack’s Mom, Hilda Barrack, our Jewish Mother. The fiery, redhead from Brooklyn, NY. It was a love affair all of its own. Two-peas-in-a-pod. Wild Man meets Wild Woman. Like Emory, Hilda Barrack was hilarious and they truly enjoyed giving each other a hard time. Hilda and Irving Barrack were tough New Yorkers. They raised five Boys in Oak Ridge. David was the baby and Irv Barrack often reminded me of this. Irv was always skeptical of me. It wasn’t until I was nearly thirty-years-old did Irv say, “You might just make something of yourself.” A might was as far of approval I ever got from the tough guy from the Bronx.

If Graning’s Genius was complex Offensive schemes. Emory’s Genius was winning over our Mothers. He didn’t have to win over our Father’s. Most Father’s want their sons to be tough Football Stars. Father’s are not overly concerned if a boy gets bruised, stitched-up and have a few minor bones broken along the way. Mother’s on the other hand prefer their sons to skip being initiated into Manhood though physical and mental torture and go straight to being Surgeons, Lawyers, Rabbis, Priest, Pastors, Professors, and Concert Pianist.

Emory totally understood the psychology of Mothers and Players.

This unique relationship between Hilda, Jewish Mother and Emory, Baptist Football Coach is indicative of the trust Emory earned from all of our Mother’s.

Hilda helps us prove two points. One, this religious experience was not about a single Faith. Emory never proselytized to David. Contrary, Emory loved the fact that one Evening David and Hilda hosted what could have been the one and only Fellowship-of-Jewish Athletes gathering in the Barrack home in Emory Valley. I’m not clear which Players made this historic gathering, but I’m pretty sure Monger and Zulliger were two. They all wore Yamikas, a traditional Jewish head covering and had a really fun time. Emory talked about this historical event often. He loved it. Our religious experience was non-denominational. David Barrack will tell you that he never felt left out being the only Jewish kid on our 1980 Team.

Second point is that I could reference many other Mother-Emory relationship stories. Mine being one of them. My Mom loved Emory, too. Rest-in-Peace, fabulous Oak Ridge Mothers that we have lost. We miss you All.

My sincere apology Readers. I had no intention of writing so much on Emory. You might say he highjacked our Story or took us Hostage. It’s a pleasant surprise to a Writer when a dominant character emerges and won’t shut up. Basically, Emory is jumping out from the page and yelling once again, “Coach Brewster! Coach Graning! This is My Story. This was my in Win in1980 and you haven’t figured my complexity out just yet. You must hear more! I have much to say!” Once I get Emory calmed down, I’ll come back to our fantastic Corner Backs and Linebackers.