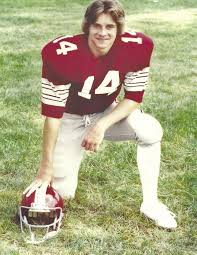 The Offense Continued. In the Center of the line sat a virtually unmovable anchor, #54, Mark Stokes. Captain of the Team, a Consummate Leader. Stokes was darn-near technically perfect as Center. In every game, Chick Graning had a sophisticated algorithm for grading each Player’s performance. These scores would be posted outside the Coaches Office on Monday when we showed up for practice after school.  It was like a report card. No one had as consistently high scores as Stokes. He always scored in the high 90’s. You never saw him lose his cool. I don’t remember any bad snaps. I don’t recall a single blitz up the middle where Doug Martin was instantly sacked. It just didn’t happen on Stoke’s watch. Like Monger, Mark was awarded a scholarship to Austin-Peay and continued on with the phenomenal Coaching Staff for another four years, too.  This is a good time to cover our highly-acclaimed, QB, #14, Doug Martin. Doug was technically perfect as well. Another Captain, always poised and in control. Never rattled. He stood tall in the pocket and picked Defenses apart with surgical accuracy. He wasn’t a scrambler. He would drop straight back or fade slightly left or right and throw beautiful passes that seemed to reach his receivers with magnetic ease. Smart, too and a hard worker. He had to be to master Graning’s Offensive Playbook. Nothing can be taken away from Doug. He’s a man who needs no introduction, his Football acumen speaks for itself. He received a full-ride to play QB at the University of Kentucky. He’s had an impressive College Coaching Career and is currently the Head Coach at New Mexico State. Congrats, Doug.  Really, he was rarely if ever sacked. The Offensive Line, took great pride in this.  Protecting our Star QB was our Sacred-Duty.  Now, let me do my own, shameless self-promotion. As mentioned, Doug didn’t have outstanding speed or Fran Tarkenton scramble-ability. He was a strong right handed stoic passer. This means his left blindside was highly vulnerable. My Sacred Calling was to protect Doug’s back as he rolled right and looked down field for our speedsters, Mark Barry or David Hall.  Sorry James Shaffer, our Right Offensive Tackle. The following is straight from a trusted source, the Internet: “The left tackle (LT) is usually the team's best pass blocker. Of the two tackles, the left tackles will often have better footwork and agility than the right tackle in order to counteract the pass rush of defensive ends.”

So there you have it!  I had to protect Doug from Defensive Ends. Me failing to do this was one of Emory’s great fears. No way Emory could win a State Championship without Doug Martin. If #14 got clobbered from a Defensive End at full-speed from the left side of the line, our winning season could be over. I wasn't strong or fast either. I did get really good at blocking Defensive Ends, Linebackers and Tackles. I got good by doing daily combat with Steve Burtnett, another Captain.  Every daily practice was a battle between Coach Brewster’s Defense and Coach Graning’s Offense. My personal battle was with Steve. We were all expected to go full-speed every practice play.  If Steve didn’t attack me with everything he had, he would face the wraith of Coach Brewster. If I let Steve get to Doug Martin, I would face the wraith of not only Chick Graning, but Emory as well.  And Coach Graning would face the wraith of Emory, too. The daily stakes were high.  Steve was really hard to block. He was tall with the leverage of a long-handled shovel. He was fast on the outside and could windmill around instantly, turn on a dime and beat you on the inside, if you weren’t glued to him. He had really long fingers that often poked me in an eye.  We went at it. We stared each other down with an evil eye.  We liked each other, but this was War.  Thanks to Steve’s fierce competitiveness, I got great at undetectable holding. I also developed my own unique chop-block that I used when being beaten on the outside.  Basically I did whatever I could get away with. My favorite block was downfield on right side of the line running plays. When Monger, Zulliger, Barrack or one of our other Running Backs broke into the Secondary, my real speciality was chasing down Safety’s and laying them flat out in the open field seconds before our Running Backs came zooming by.  Man, that was fun!  Enough about me. In the next Post, I’ll start with “Rock”, #73 James Shaffer.