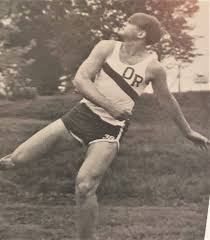 The Offense Continued. “Rock”, #73 James Shaffer. Not “The Rock.” James was Rock. On the right side of the Offensive Line, James stood as solid as a concrete pillar. In full uniform with helmet on he appeared to be an enormous Rock. So Rock stuck. And Rock couldn’t be easily budged. Rock was second generation Offensive Tackle. His older brother David is a 1969 ORHS grad who went on to play for UT 1971 to 1973. In a ’69 State Championship Track Meet, David Schaffer threw the discus a ORHS record, 168 feet, ½ inch. This record still stands in 2020. James greatly respected his older brother’s athletic achievements and proved himself as a Wildcat Warrior. Offensive Tackles respect each other. James and I have been friends since our first Woodland Days. During the 1980 Season, Shaffer did daily practice-battle against #76, Defensive Tackle, Dight Skidmore (Skid). Lets digress to a funny story that Skid is very fond of telling. As I mentioned earlier, every practice was like a real game. Coach Brewster’s Defense vs Coach Graning’s Offense. Every single play was under Emory’s microscope of perfection. If the Defense screwed-up, Coach Hale would scream:”Coach Brewster!” If the Offense screwed-up, Coach Hale would scream: ”Coach Graning!” The stakes and tension were always high. Doug Martin never got sacked in games or practice. One practice day however, Skid and Shaffer devised a devious trick. They corroborated in a trick against Doug. Skid convinced Shaffer that the next time a right side “Option Play” was called, Shaffer would tip Skid off and allow him to go after Doug unblocked. That’s exactly how it all went down. The play was called, James gave the signal, and Skid hit Doug with everything he had. Coach Hale went ballistic. Coach Graning, went ballistic and broke his legendary clipboard over Shaffer’s helmet. He probably had to stand on tiptoes to reach the top of Rock. This story can’t be done justice without hearing Skid snicker (He, He, He) after he tells how hard he hit Doug. And that was the day that Coach Graning broke his clipboard.

Stay tuned for more of the Offense Boys.