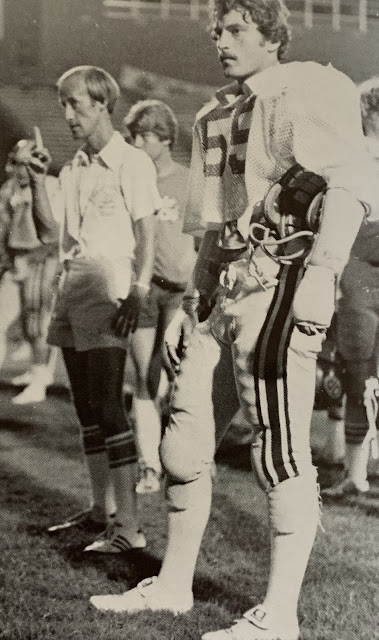 Assistant Coach.  Barry Saunders.  Longest standing Coach in ORHS history.  Saunders proved to be resilient and worked with six Head Coaches.  He had the peak experience of Coaching in four State Championship Games, which resulted in 3 State Championship Titles: 1979, 1980, and 1991.  Saunders received the East Tennessee CAREacter Star Assistant Head Coach of the Year Award in 2019.  Coach Saunders had a gift for working with Kickers.  He is highly respected In Oak Ridge and he too showed much love for his Players.

This picture shows Saunders making some very important coaching point about Kicking and me once again deep in a daydream.  You can see clearly that we are at Blakenship Field and that means we were preparing for a big Playoff Game.  I’m wearing a Practice Jersey.

Now that all of the Coaches have been covered, this is a good transition point to the Senior Players of 1980.  One of the unique characteristics of the 1980 Team is that there were 22 Starters.  11 on Offense and 11 on Defense.  No one started both ways except #21, Scott Monger played Running Back & Strong Safety. All 1980 Starters, but Bart Brinkman were Seniors.   Bart was the only Junior who started in 1980.  It’s impossible to not reference the 1979 Season when reflecting on the 1980 Season because it was a seamless transition for all of us 1980 Seniors.  All of the Senior 1980 Starters played on the 1979 Championship Team.  Richard Malinauskas being the only exception.  In the series of Post moving forward, I’ll speak to the 1980 Seniors who had the unique experience of going 22 and O from the 1979 Season to the end of the 1980 Season.  I’ll start with the Offense.