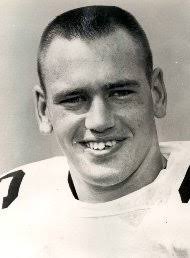 Offensive Coordinator. Chick Graning. A Mastermind of complex offensive schemes.  The Genius with a Bird’s-Eye-View from The Tower.  Chick Graning loves Football.  Two-time High School All-American and Captain of the football team at Baylor School in Chattanooga, TN. All-Star Running Back under the tutelage of the infamous Bobby Dodd at Georgia Tech.  Legendary for the brutal, cheap-shot that he received in Georgia Tech vs Alabama rivalry game that broke Chick’s jaw (picture from Chick at Tech).  I’m super privileged to have played on his Offensive Line as Left Tackle.  Chick believed in me as a starter when others doubted.  I’m grateful for him for this was a formidable period of my development as a young man and I needed to be around men like Chick.  He led his Players with heart-felt affection.  No doubt, he loved us like he did his own children and we loved him as if he were our Father.  At Blakenship Field he had a commanding view of the field from the press box from where he executed his well-orchestrated game plans.  More interesting though, on the road, he had a scaffolding Tower built on our sideline.  From The Tower he called the Plays that eventually led to a dreamlike season with 13 Wins and 0 Loses.  My gut tells me there’s never been a High School Coach as smart as Chick Graning in the United States.  He taught Economics and could have easily had a career on Wall Street.  Yet Football was his Calling and he stayed true to his Bliss.  And we the young men that had the privilege of playing for Chick were given a gift that propelled us all onto becoming strong independent men.