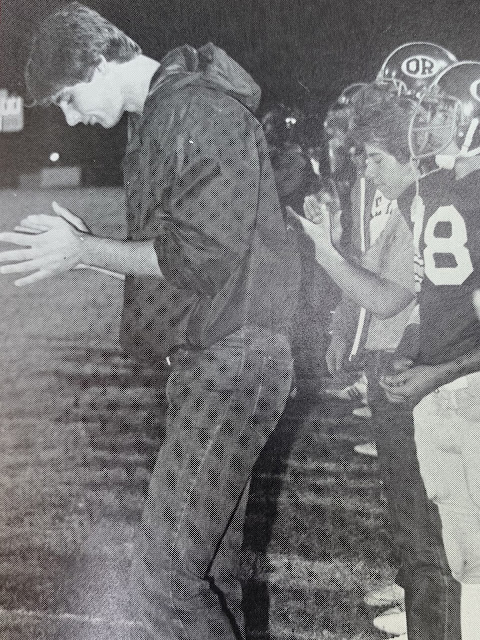 As we pivot to Defense, let’s pivot back in time. The end of Summer. We could hear their laughter. Sun-rays shimmered off a rippled surface. We could smell Mom’s wash-like Clorox, whitening our Game-day socks. The Pool as if an Oasis rested across Providence, just out of our reach. A mirage to young men dying of thirst, craving cold water and girls in bikinis. Our thirst was unquenchable for both. Older Boys, wise Veterans, scolded us for drinking too fast, too much. We Greenies, had to learn the hard way. Within minutes, we vomited warm water. Your mouth looked and felt like a rabid dog.

You may ask yourself why. Why would we? Why did they endure this day-after-day. Year-after-year. Why? Because all of us as little boys had stood on that gigantic hill at Blankenship Field on a cool Autumn night, under Friday Night Lights and watched Wildcats, who looked like a Giant Army go down those concrete steps to the Gridiron. When the procession of Players started down the steps, we boys froze instantly and then rushed, nudged to find a tiny space to slap those Giant shoulder pads. The cleats clamored. The slaps harmonized. We all felt Victorious. That is the reason why. The thrill of Victory. To be part of. To be part of something that is bigger than life. We little boys yearned, dreamed and many of us knew deep in our guts, that if we worked hard enough, if we endured Winter Agilities, Summer Two-a-Days, and after school practices that extend into the dark, we too would feel the Victory of wearing that Game Jersey. We too would wear those polished white cleats. We too would feel the slap on shoulder pads. We too would win!

#52 Steve Burtnett didn’t attend Jefferson or Robertsville. Steve came from out-of-state and fit like a glove. It was as if he had been one of us all along—a boy from Woodland, Emory Valley or Linden. We never saw Steve as an outsider. A natural leader. Steve became one of our five Captains of the 1980 Team. As I spoke to already, Steve was an excellent pass rusher and extremely hard to block. You can see in this picture the long fingers that would often poke me in an eye. And he wasn’t trying to poke me. As I said, we went at it. We were swirling, twisting doing hand-to-hand combat just like Coach Brewster had taught us to. No wonder we didn’t get injured every practice. I can’t pickup a bag of leaves today without getting injured. Unfortunately, Steve did get injured early in our Regular Season. Yet, he didn’t give up. He engaged and he leaned-in and he led from the sidelines never with a hint of ever feeling sorry for himself. He helped keep our sidelines fired-up. Every Cat was In-the-Game. It was a dynamic experience. Not a single Player was passive. Sophomore, Junior, Senior, if you were on the sidelines you were In-the-Game. And if you drifted even for a few minutes, a Leader like #52 would pull you back into the game. Even though Steve didn’t get to play his full Senior year, he still earned a scholarship to Austin-Peay and had the pleasure of spending four more years with our fantastic Coaching Staff, Monger and Stokes.

Steve left big shoes to fill. Big Richard “Mal” Malinauskas stepped up. Even though Mal was on Defense, Coach Graning loved him as much as Coach Brewster did. Graning affectionally called Mal, “George Kennedy”, for his resemblance to the movie star. So I had to now get good at blocking a big guy that would plow straight over me or power through the gap between me and Bart Brinkman. In hindsight, this was fantastic for the different types of Opponents I would face in live Games. Burtnett, helped me learn how to block fast pass rushers and Mal helped learn how to block powerful big men. Mal was also really smart like Mark Berry and was a member of the National Honor Society.

In the next Post, we’ll carry-on with the Defense and you’ll hear how Skid once scored a touchdown.